How a young lad sent the world swinging

Modern life is virtually unimaginable without clocks or watches. Certainly, one day everybody asked themselves how does an old alarm clock work? Or maybe even tried to disassemble and fix some watch. So many small screws, gears and springs inside. Take those tickers apart and – and here you are, sitting over a pile of tiny details. Which is the main one?

In the beginning of the 16th century, a locksmith from Nuremberg, Peter Henlein, created a watch with a mechanism made of gears and a spring. It was a very simple device, and its accuracy left much to be desired: the watch ran fast or slow depending on many factors, first of which was the spring value and gear tension. The watch lacked an escapement mechanism, the “heart” of a classic timepiece. 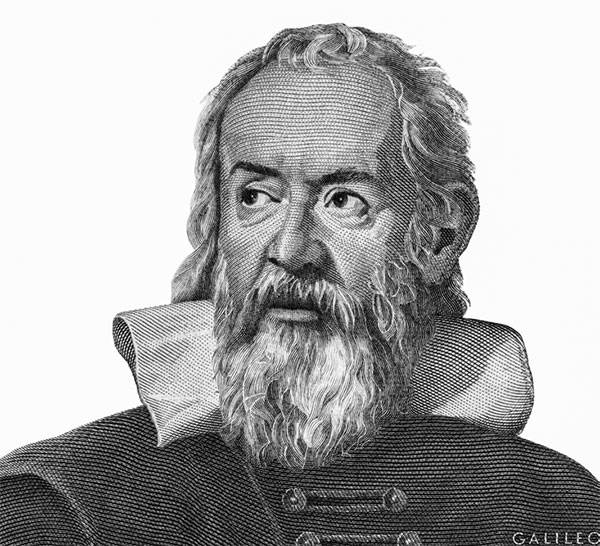 Galileo Galilei was an Italian physicist, engineer, astronomer, philosopher, and mathematician
that invaluably influenced the development of many scientific disciplines.
Born 15 February 1564, Pisa, Duchy of Florence.

It all started with a pendulum. It is believed that it was invented in Pisa

In 1584 as a medical student, nineteen year old Galilei had to attend services in the Pisa Cathedral.

The legend says that one of those days he was distracted by a curious phenomenon: massive bronze chandeliers attached to the ceiling of the building with long chains were swinging, being pushed by the wind and each oscillation took the same time while the amplitude was growing smaller and smaller.

At that time, there were no accurate time measuring devices. But the young man found a way: he gauged the oscillation time against his own heart rate. Counting the number of heart beats, the experimenter came to the conclusion that while oscillations were converging and their amplitude grew shorter, the time of each oscillation remained exactly the same.

Back at home, Galilei proceeded with his experiment. He made all sorts of objects swing: a door key, pebbles on a string, an empty ink-pot, anything he could find to simulate the oscillations of the chandelier.

The outcome of his initial research came in the form of a very simple pendulum: a small bob on a string. Pulled aside and dropped, the bob would oscillate for a long while.

The research led the inventor to draw a conclusion that the pendulum swing always take the same amount of time, independently of the amplitude that became known as the first pendulum law.

Galilei assumed that his innovation could be useful to doctors to check a patients’ pulse. He connected a pendulum to a simple counter and built a device that he called “Pulsilogium”. 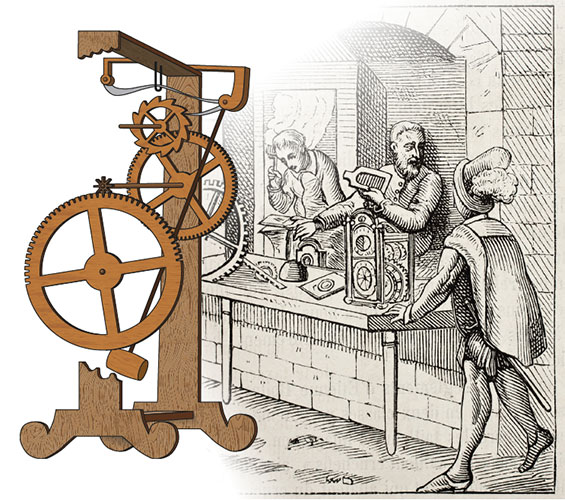 The drawing of Galileo’s pendulum clock
which includes the escapement mechanism
(made approximately in 1637.)

His time measuring was still based on his own pulse

We can only assume whether a genius scientist planned to use a pendulum to create an accurate clock. Alas, he didn’t come back to it until he was over 70 years old and lost his eye-sight.

According to his father’s theories, Galileo’s son Vincenzo along with the genius’s student Viviani sketched a clock mechanism. While it is unknown whether they built an actual device, the clock mechanism created later was based on this initial design.

For his escapement mechanism Galileo used a pinwheel and a pair of curved pawls connected to a pendulum. As the pendulum swings, one pawl lifts clear of the pins allowing the wheel to rotate until ‘caught’ by the other pawl. As the pawl is caught, it imparts a small impulse to the pendulum which keeps it going. 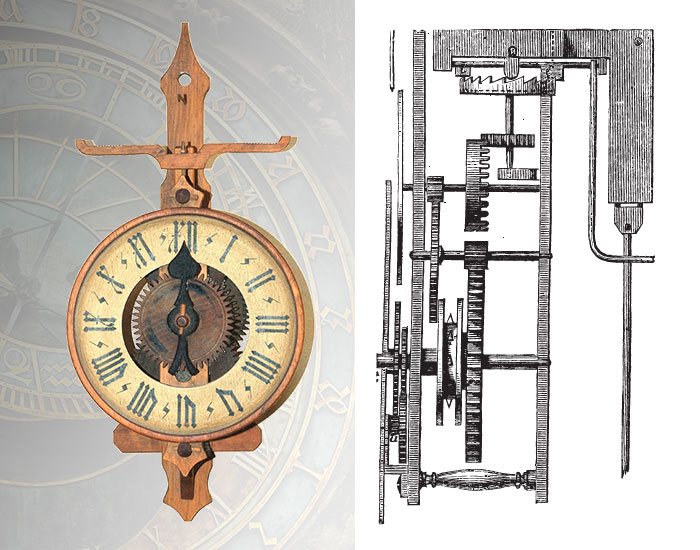 The great and fabulous Mechanical Clock!

In 1657, Christiaan Huygens issued a paper describing his recent invention – a clock with a pendulum. Huygens’ clocks were precise and in the next 40 years the scientist returned many times to his inventions to improve them even more and to learn more about the properties of the pendulum.

In his clock, Huygens used a spindle-type mechanism that wasn’t as universal as the one suggested by Galileo. In particular, it could only work with a pendulum with a large oscillatory amplitude.

A stable pace of a clock with a large oscillatory amplitude required in the spindle-type mechanism was virtually unachievable. There had to be a way to reduce the amplitude. That way came in the form of an anchor escapement mechanism. 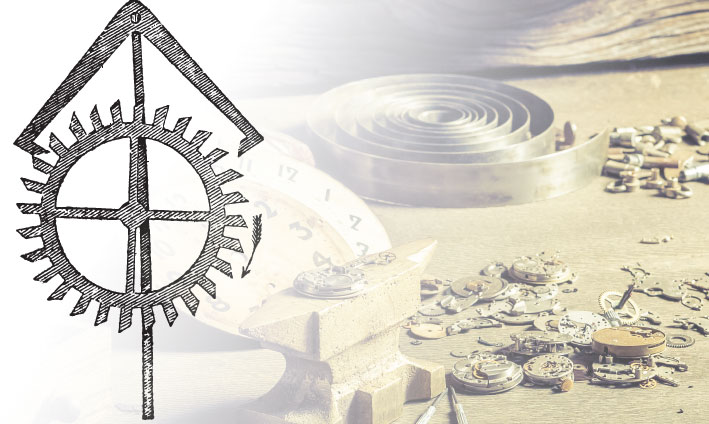 The escape wheel is attached to a cylinder gear with a chain over it. The anchor, a slightly curved detail attached to the top of the pendulum, has two teeth on each of its arms that are called pallets. Swinging along with the pendulum, the anchor alternately catches and releases an escape wheel tooth with the pallets. It is believed that the credit of invention of an anchor escapement belongs to Robert Hooke and dated 1670.

In 1671, English clockmaker William Clement made the first clock with anchor escapement challenging the precedence of Hooke’s invention.

Later, in 1715, another English inventor, clockmaker and geophysicist George Graham, improved the anchor escapement mechanism to make it much more accurate, up to 0.1 sec. Graham’s mechanism was used for almost 200 years up until 1890.

Naturally, George Graham was not the last inventor who had ideas about how to make clocks more accurate and efficient – many clockmakers suggested their approach to the essential mechanism. The history of clockmaking has seen over 200 anchor escapement mechanisms invented.

In the 19th century the electric watch came into the picture for the first time. The pendulum in this type of mechanism was controlled by an electric board. In the mid 20th century, the quartz watch was introduced. It uses an electronic oscillator that creates a signal with a very precise frequency and is regulated by a quartz crystal.

Today, the mechanical pendulum clock can’t compete with electronic timepieces. They remain aesthetically valuable and their history is an important stage of the development of scientific thought that will inspire generations to come.

About the mechanism and the range of its use

Metronome is a device that counts regular intervals with clicks or other sounds. Mainly, in is used by musicians to practice playing to a steady pulse. In recent years, it was also used during concerts: for example, to synchronize pre-recorded background and electronic instruments.

“Musical chronometers” came into use in the end of the 17th century. The most convenient was the metronome created in the early 1800s by German inventor, engineer, and showman Johann Nepomuk Maelzel. It is believed that The second movement of Ludwig van Beethoven’s Symphony No. 8 was an affectionate parody of Maelzel’s Metronome.

Today, along with mechanical metronomes we use electronic ones. The later ones are often combined in one body with tuners.

A metronome can also be used to time physical exercises, scientific experiments, or even as a musical instrument of its own – like in Poème Symphonique for 100 Metronomes by György Ligeti or Alfred Schnittke’s Dead Souls Two movements.

Newton’s Cradle is a mechanical system named after Isaac Newton that that demonstrates conservation of momentum and energy and the transformation of kinetic energy to potential and back. With the lack of opposite force (tension) the system could work forever, but in reality it’s impossible.

Seconds pendulum is a pendulum that oscillates in a 2 second period: one second for a swing in one direction and one second for the return swing. The oscillations frequency is ½ hertz.

The weight is suspended from the pivot and swings freely. When displaced from its equilibrium position, the pendulum is subject to gravity, tension and elastic force.

When released, the restoring force combined with the pendulum’s mass causes it to oscillate about the equilibrium position, swinging back and forth.

The time for one complete cycle, a left swing and a right swing, is called the period.

The period depends on the length of the pendulum as well as to some extent on the position of the weight (the moment of inertia in relation to the center of gravity), and the amplitude (the swing).

Mechanical Clocks are the clocks using a pendulum mechanism for measuring time. It is propelled by the weights, springs or electric source of energy. To measure time, they use the inertia of an oscillatory system – the pendulum, regular or spring-based that uses a spiral spring as a balance controller (+/-) 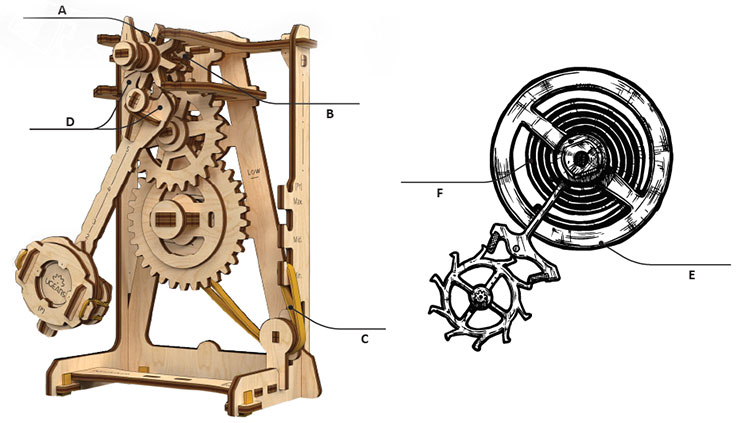 Technical design and principle of working

The escape wheel with inclined cogs (A) is attached to the sprocket wheel (B) that transmits impulse from the rubber band (C). The top of the pendulum is made in a form of an anchor (D).

Wall clocks, grandfather clock, tower clock or a watch use a weight as a source of energy. The hand or pocket watch may use a spring to power up and a balance wheel (E) attached to a spiral spring instead of a pendulum. The balance wheel produces rotating oscillations around its radial axis.

The oscillating system in a clock or a watch is a pendulum or a balance wheel. The power source is a weight or a spring. Anchor meshing with escape wheel works as a feedback device. It allows the escape wheel to turn by one cog in one half-a-period.

Feedback is produced by the anchor meshing with escape. It allows the escape wheel to turn by one cog in one half-a-period. Each half-period of the pendulum oscillation, the cog of an escape wheel pushes the anchor in the same direction while transferring a certain energy impulse that compensates for tension energy loss. Thus, the potential energy of a weight or a spring, gradually in small impulses, transfers to the pendulum.

Mechanical self-oscillating systems are widely used and are found virtually everywhere in our daily lives. The examples are many: steam turbines, combustion engines, electric doorbells, the strings of musical instruments as well as wind instruments, and our vocal cords when we talk or sing. 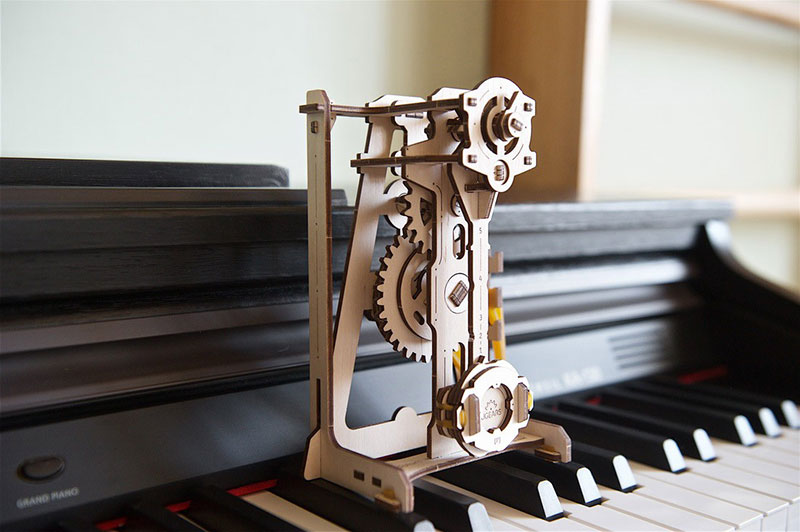 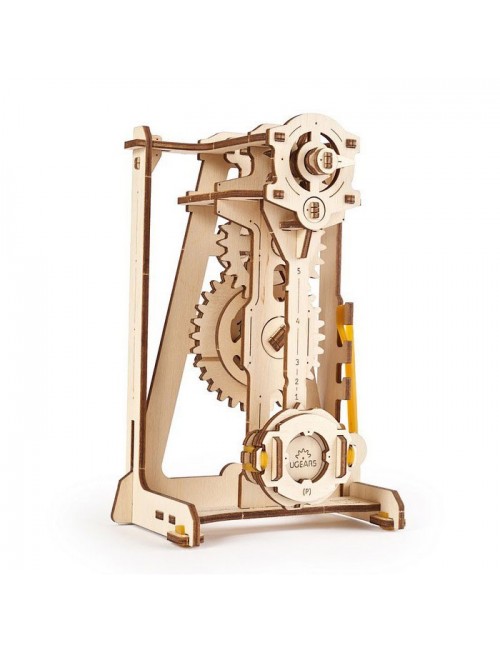 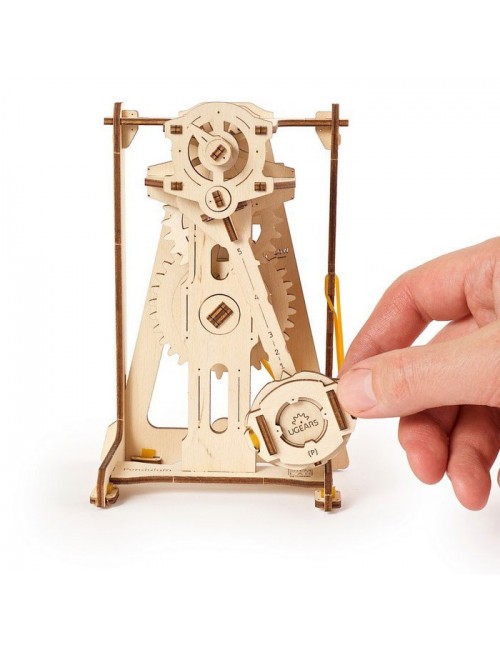 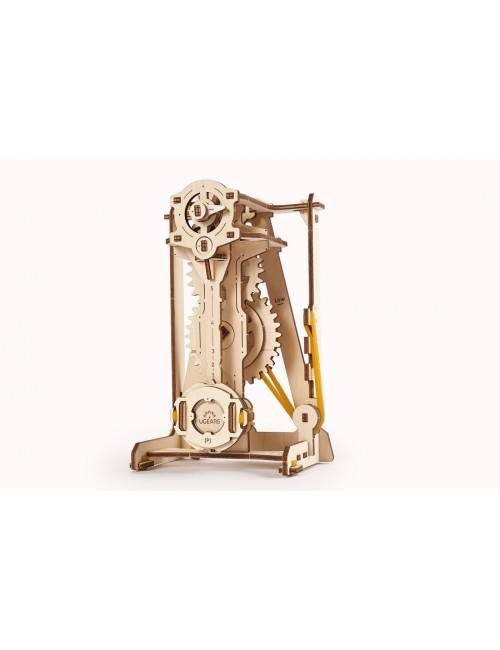 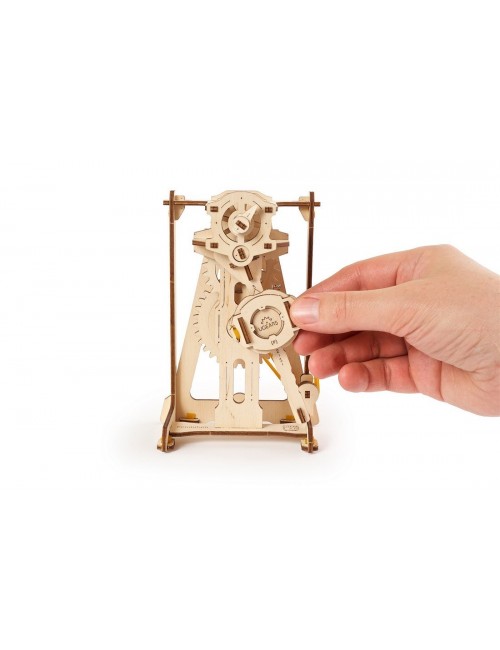 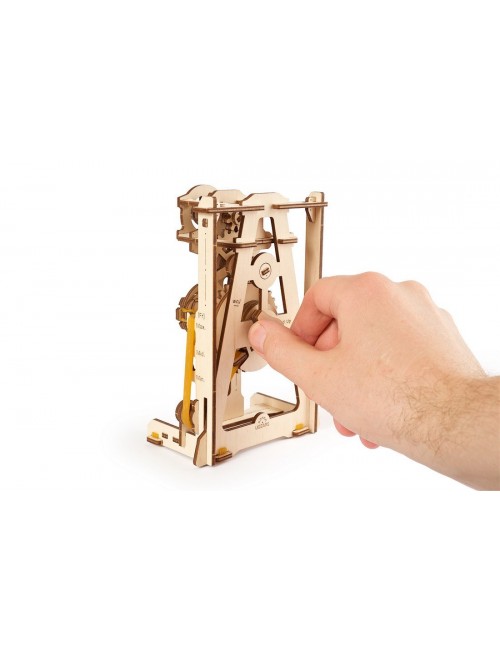 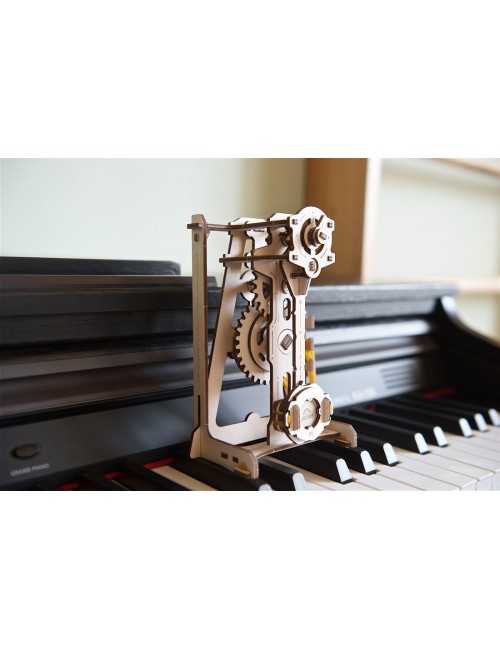 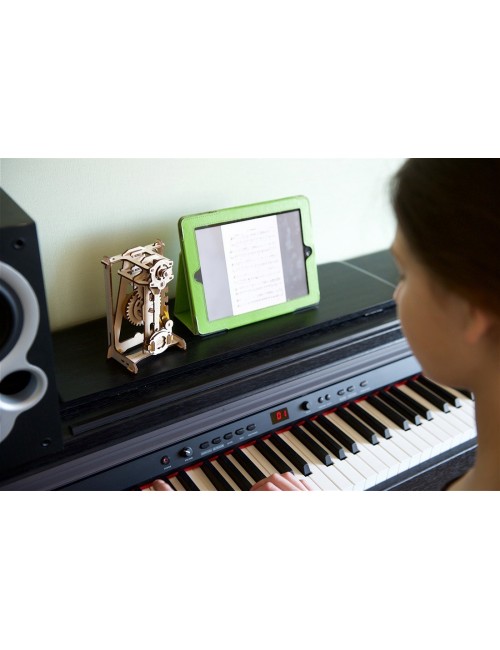 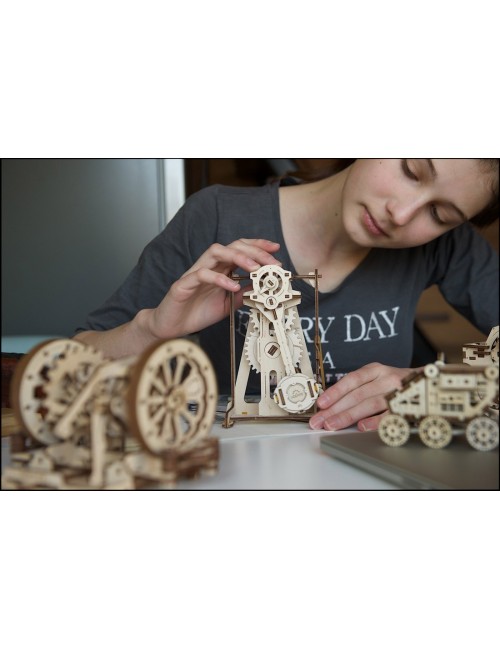 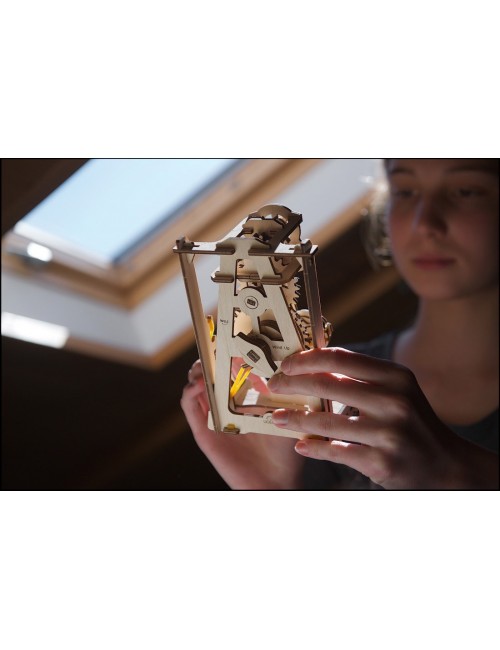 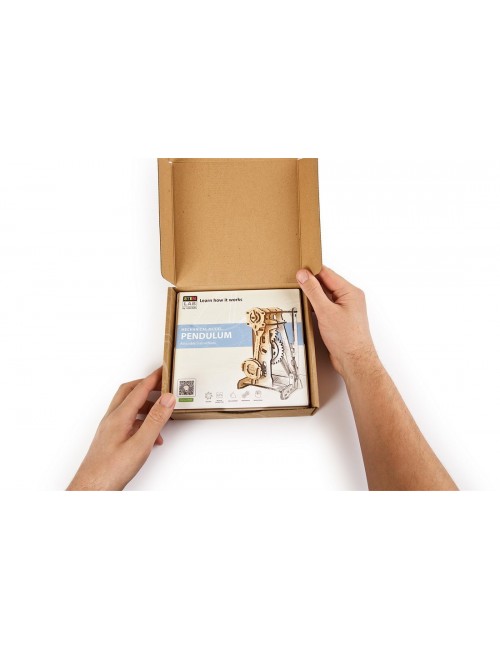 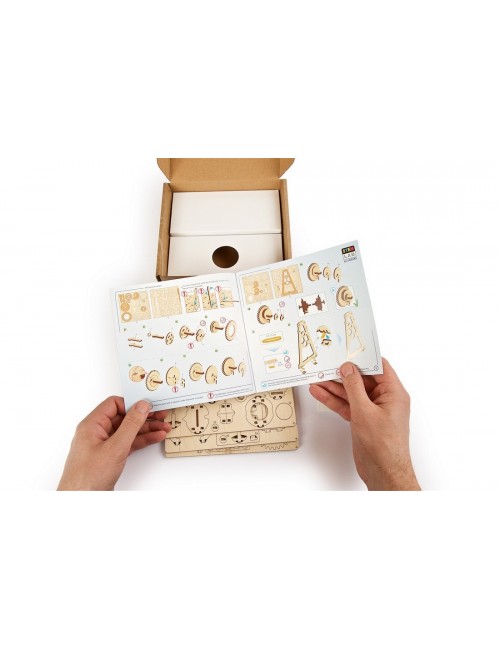 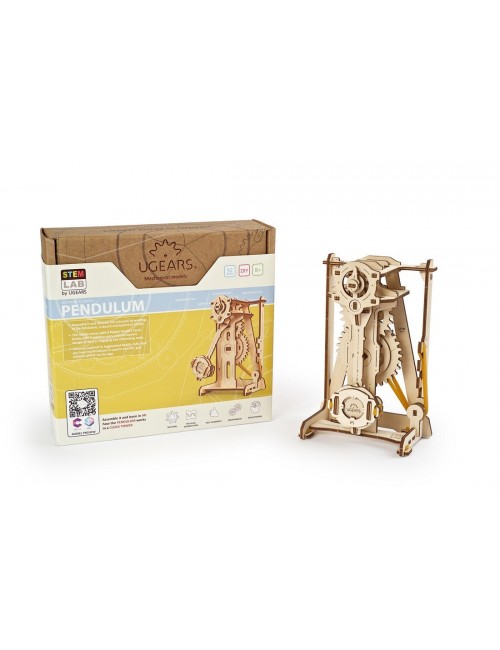 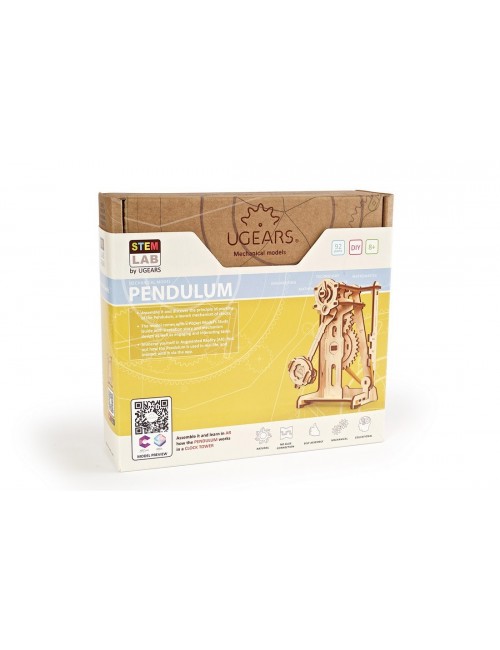 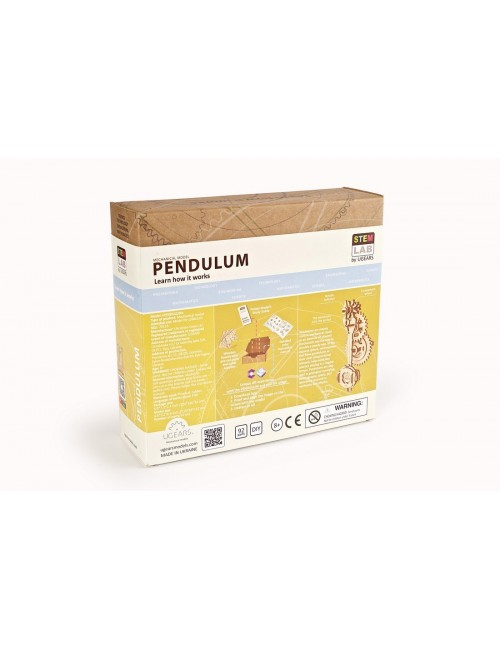